Sligo Field Club began publishing an annual Journal in 2015 and has now reached its eight volume, which has been printed and will be available before the end of November.

This volume is a special one in that it recognises in several ways the tremendous work of Dr. Don C.F. Cotton, Sligo’s outstanding naturalist, who died in January.  This article was well advanced last Autumn but needed preparation for publishing.  This was done by Dr. Tom Curtis and Dr. Maria Long in recent months. Botany, birdlife, insects, megafauna were all part of Don’s life.  The range of his knowledge can be seen in all our previous volumes.  His map of peat along the Sligo coast is most important. Nigel Monaghan has brough together from friends and colleagues a tribute article for him, telling of stories and successes.

The largest article this volume is Don’s detailed record of his work as Leitrim County Botanical Vice-Recorder, illustrated with maps and diagrams.  As it was Don’s wish a copy of this volume is being delivered to all educational establishments on Co. Leitrim through the Education Centre in Carrick-on-Shannon.

Ian Sanders, Stephen Daly and Michael Flowerdew explain the metamorphic geology of the Ox Mts. south of Lough Gill, illustrated by maps, diagrams and images of thin sections of rocks which show the wonderful mix of minerals and colours.

Martin A. Timoney writes again about Knocknashammer, an imitative ferta, this time taking the site to a national context.  A ferta is where a tribe buried their dead at an ancient monument or what appeared to be an ancient monument.  Among the footnotes is the recognition, perhaps for the first time, of a secular cemetery of the 5th – 7th centuries at Carrowmore.  Within the article are the themes of the debate between Dr. Betty O’Brien in Dublin, Prof. Ken Dark in Redding, Navara and London and Timoney about what word, what term, should be used to describe the status of these very special people, people buried within sight of Carrowmore, but not within it.  The article includes Laureen Buckley’s detailed analysis of the skeletons on the three seniors of the tribe.

Mathew Seaver, Bernard Gilhooly and Linda Lynch show what was found in the excavation of a lintelled long cist grave Carrowgarry near Inishcrone and put it in a local and national context.  The C14 date for the burial centres on 468 AD, and thus it is within the time-frame of the Knocknashammer ferta.

Jim Higgins elaborates on the rebuilt decorated high altar in Sligo Dominican Abbey, showing how much has been lost of the surroundings of that altar over the centuries.  Following that Higgins and Timoney identify some of the parts of the altar that was in the south aisle of the Abbey, something not recognised before.  This article begs questions about the original position of the O’Crean monument of 1506 – where was it originally?

Martin A. Timoney sets out what can be said so far about an almost circular enclosure, in Ballinafad and Bunadobber townlands, hardly deserving of the late 17th century description ‘great fortification’, though almost a kilometre in diameter.  This enormous feature was not recognised until recent years.  Its date lies somewhere between 1590 and 1620, and was probably associated with Ballinafad castle.  Does anybody know of anything similar at this scale?  Con Manning suggested that the castle may have a star-shaped fort beside it, which, if so, adds another of these rare forts as far as Sligo is concerned.

The author of a 1945 article on the Walsh family of Breeoge still remains a bit of a mystery to Martin A. Timoney.  Mark Clinton’s comments on the claimed Carrickmines to Breeoge family links are applicable to other attempts at establishing an ancestry of importance.  But the Breeoge link has to be sound, Robert William Walsh named his Buckinghamshire house Knocknarea.

John McKeon details the many phases of the building of Mullaghmore harbour and illustrates it with 19th century maps and more recent photographs.  The maps by Alexander Nimmo and Robert Stevenson are from the Palmerston Broadlands archive now in Uni. of Southampton and our National Archives.  McKeon has been extracting facts from records and presenting them in a coherent paper.

John Mullaney recalls his youthful trips across the eastern part of Tireragh, Beltra to Aughris, and reaching the Corragh Donn sea caves.  There are some deep thoughts wafted into this piece.

Louise Keegan details the non-Sligo Field Club part of the life of her grandfather, Patrick Tohall, who was the founding Secretary of Sligo Antiquarian Society in 1945 which became Sligo Field Club the following year.  Tohall survived WWI to make a huge contribution to Armagh and Tyrone history and then to Sligo and Leitrim archaeology, folklife and architecture.  The records come from the Tohall Family archive and that of SFC.  His life in Castlebar, Roscommon, Carrick-on-Shannon and Sligo is delt with, his wife, Elizabeth McTiernan, who was from Tarmon, Co. Leitrim, the three houses he designed, the diaries he kept.  Albert Siggins published record of some of Tohall’s work west of Dromore West in Dedicated to Sligo, 2013.  Part of Tohall’s work included having Dutch palaeobotanists develop a pollen chart from Owenykeevaun Bog.  Michael O’Connell makes comment on that chart, published here for the first time.

The Presidential and an Editorial, contain thoughts worthy of a few reads!

Jim Foran, in the Presidential for 2022, opens with ‘the ongoing flow of events, unprecedented in our lifetimes.  No sooner did the efforts to battle the Covid 19 pandemic achieve some success, than we witnessed large scale warfare in European for the first time since World War II.’  This has been a time of change, dramatic change, but then that is what we in SFC are interested in, change over the centuries.  He reminds us that Sligo Field Club faces practical challenges, covering the costs of venues, lectures and publishing.  He thanks funding agencies for their support.  The core of our support comes from our Members and the wider public who support our events.

The Editor looks at the passing of time and the passing of people who academically gave much to Ireland, Cotton and George Eogan, and he includes time charts for Sligo, conveniently placed on the last page that should help put our past in sequence.  There are perhaps 10,000 monuments from 10,000 years of settlement in Co. Sligo.  While these are our inherited heritage we should also see them as assets to be nurtured, talked about and visited.  He refers to a recent SFC lecture on rush crafts, boats made of rushes and ,akes a plea for greater care, restorative care, of some of our Medieval church buildings and the need for a Museum of Sligo.

The articles are copiously illustrated in colour and extensive further reading lists are included – the footnotes in many cases prompt further research.  It was printed at KPS Colour Print in Knock.

Digging is a thing archaeologists do, but several of these articles reveal the results of a different type of digging, digging into Archives, Library, University and Family ones, and the results add much to our understanding of our county.

This volume, at 224 pages, is sixteen pages bigger than last year’s but still costs only €25.  Back numbers of SFCJ are available – this would be a good time to complete your set, as the reserve stock of some are running low!  The full eight volumes cost €165.

The National Museum of Ireland, the Atlantic Technological University Sligo Campus, the Cotton family and Sligo Co. Co. as well as some individuals have financially supported the printing of this volume.

Our website, sligofieldclub.ie, provides a convenient membership application page and we encourage everyone with an interest in our activities to join for the modest fee.

Our lectures are on the last Friday of the month, in the Sligo Education Centre on the Atlantic Technological University Sligo Campus.

This volume is available from SFC Committee, at SFC lectures and on outings and Liber Bookshop, O’Connell St., Sligo, for €25, the same price as last year’s journal, though it has sixteen pages more. 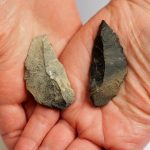 This website uses cookies to improve your experience while you navigate through the website. Out of these cookies, the cookies that are categorized as necessary are stored on your browser as they are essential for the working of basic functionalities of the website. We also use third-party cookies that help us analyze and understand how you use this website. These cookies will be stored in your browser only with your consent. You also have the option to opt-out of these cookies. But opting out of some of these cookies may have an effect on your browsing experience.
Necessary Always Enabled
Necessary cookies are absolutely essential for the website to function properly. This category only includes cookies that ensures basic functionalities and security features of the website. These cookies do not store any personal information.
Non-necessary
Any cookies that may not be particularly necessary for the website to function and is used specifically to collect user personal data via analytics, ads, other embedded contents are termed as non-necessary cookies. It is mandatory to procure user consent prior to running these cookies on your website.
SAVE & ACCEPT
Translate »